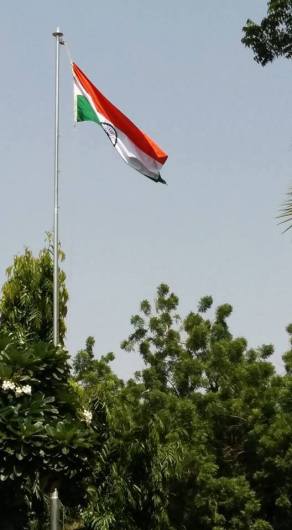 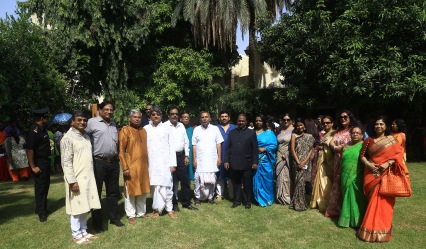 Last Monday, 15th August was my fourteenth year in Sudan celebrating Indian Independence Day. As in the previous years the Indian community got together in the morning at India House, the residence of the Ambassador. The Ambassador of India H.E. Amrit Lugun unfurled the national flag with the singing of the national anthem. He then delivered his speech to around 200 people from the Indian Community which included both the people of Indian origin and Indian nationals. He recalled the historic moment at the 1955 Bandung Conference, where the delegation from Sudan, a country still not independent did not have a flag to mark its place. Taking out his handkerchief, Jawaharlal Nehru wrote “Sudan” on it, thus reserving a place for Sudan in the international community. India and Sudan have maintained cordial and friendly relations. Sudan Block in India’s National Defence Academy was set up with the funding of one hundred thousand pounds from the Sudanese Government in recognition of the sacrifices of Indian troops in the liberation of Sudan in the North African Campaign during World War II. Ambassador Lugun read out the speech of the President of India. To quote an excerpt “As we celebrate our seventieth Independence Day, I respectfully bow to the heroes of our independence struggle – known and unknown – who fought, suffered and sacrificed their lives to win freedom for us. Mahatma Gandhi’s luminous leadership finally made the British Quit India in 1947. When we gained independence in 1947, nobody believed that India will survive as a democracy. Yet, seven decades later, one and a quarter billion Indians with all their diversity have proved those forecasts wrong. The strong edifice of democracy built by our founding fathers on the four pillars of justice, liberty, equality and fraternity has withstood several threats from both within and without and has grown from strength to strength”.
The speech was followed by a cultural programme where children from Omdurman Indian School and Khartoum schools presented patriotic songs. The members of the Indian Ladies Club of Khartoum sang patriotic songs in a group. In spite of being a working day people took out time in the morning to pay tribute to their mother land.