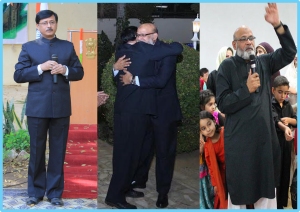 We were at a press conference with the Ambassador of India H.E. Sanjay Kumar Verma. In the middle of the meeting the Ambassador received a call on his mobile and we all asked him to take the call. But he didn’t saying that the call was from the Pakistani Ambassador who was his great friend and would understand that he is busy. We raised our eyebrows especially the Sudanese journalists. He then shared an anecdote which happened on a flight to Port Sudan. Ambassador Verma was sitting next to the Pakistani Ambassador H.E. Mohammad Sarfraz A.Khanzada. They kept talking to each other in Urdu language, which is spoken in both the countries. This was noticed by an Ambassador of another Asian country in the same flight. He couldn’t control himself and asked both of them what the hell is happening. Later Ambassador Verma remarked that if you remove politics, people of India and Pakistan are the same lot. “We participate in marriages, Bollywood, food, language and everywhere. Unfortunately the divide is based only on religion. India has 170 million Muslims which is a large number and India is a secular country.” Ambassador Verma also added that the new Government of India looks like will improve the relations between the two countries.