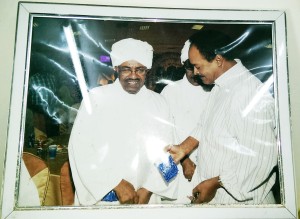 The most popular sport in Sudan is Football. Sudan has a rich football history in Africa and has been  champion of Africa Cup of Nations in 1970. The two biggest football teams are Al-Merrikh and Al-Hilal. This reminds me of arch rivals Mohan Bagan and East Bengal both from Kolkata back home in India.

In Sudan one of your identities are either you are a supporter of Hilal or Merrikh. I am a fan of Merrikh mainly because the jersey colours are same as my favourite East Bengal. I have watched Merrikh play Hilal twice in Omdurman stadium. Dr. Omer Mohamed Khalid a famous Chest Physician in Omdurman, the old capital of Sudan, is a staunch supporter of Merrikh. He once met the President of Sudan, Field Marshal Omar Hassan Ahmad Al-Bashir. He knew that the President is a supporter of Al-Hilal. Dr.Omer asked him why he was wearing blue in support of Hilal. He said “You are the President and you should be neutral”. The President replied to him saying that once Merrikh becomes a champion the blue he is wearing will change to orange. This never happened even though Merrikh has become the champion club of Sudan.

Dr. Omer Mohamed Khalid is also a poet. He wraps up his regular health shows in popular Blue Nile TV with his own poem. He is a celebrity thus I deserve a picture with the tall personality. 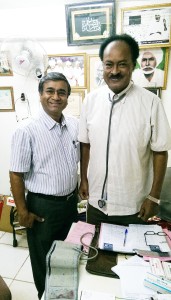 One thought on “The Doctor Who Is Also A Poet”