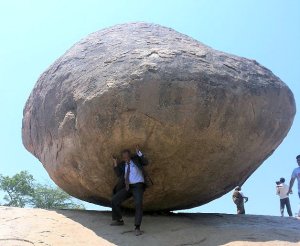 There are about 30,000 Sudanese who have studied in Indian Universities and at any given point of time there are 4000 students studying in different parts of India in different streams and different Universities. Sudanese Indian Friendship Association (SIFA) is an officially recognized body in Khartoum for the alumni of Indian universities. It has an office building which has been fondly named as Taj Mahal and has around 1481 members.

Yousri Burei is the Chairman of SIFA. SIFA is involved with multifarious social activities.They recently organized a symposium titled ‘Democracy in India’ in which the Ambassador of India spoke at length about the constituency and the practice of Democracy in India.

As the Chairman, Yousri Burei has been shouldering great responsibility of SIFA. His simplicity and sincerity is appreciated by the members. In this picture you can see Yousri Burei shouldering the famous rock of Mahabalipuram near Chennai in India. Yousrie had studied in Pune, but as the Chairman of SIFA has to do the balancing act with members who studied in different parts of India. This picture with him and the balancing rock is symbolic and significant.

2 thoughts on “SIFA is Sudanese Alumni of Indian Universities”