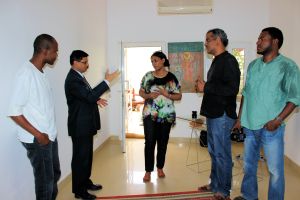 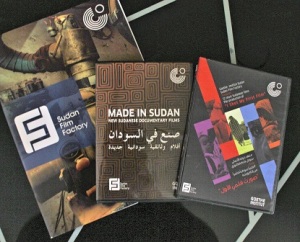 The Ambassador of India to Sudan H.E. Sanjay Kumar Verma visited several factories in Sudan in the recent past. Steel, sugar, plastics, textile and pharmaceuticals to name only a few.
On 19th August’14, Ambassador Verma visited a unique factory of its kind- Sudan Film Factory. This visit was in response to an invitation from Talal Afifi Curator and Coordinator of Sudan Film Factory. Along with him were young film makers of Sudan namely Mohamed Hanafi, Areeg Tayseer Zarrouq and Mohamed Subahi. The meeting lasted for over an hour and Talal described it as an exchange of passion and culture between Sudan and India.
Talal Afifi introduced Sudan Film Factory as an independent non-profit organization offering a platform for training and networking of young film makers with a focus to rebuild relations with Africa and Asia.
H.E. Sanjay Kumar Verma discussed with the team present on various aspects like providing training from Indian experts under the Indian Technical & Economic Cooperation (ITEC) programme with scholarships. He spoke of Film and Television Institute, Pune which offers courses on Direction, Cinematography, Editing, Sound Design, Art Direction, Acting, Screen Play, Animation and all aspects of film making. The other topics of discussion were workshops in Sudan by experts from the Indian film industry; hosting of an Indian film festival in Khartoum, Omdurman and Bahri; refurbishment of local theatres with the help of Indian expertise.
This writer was very pleasantly surprised to learn that the Sudanese film makers knew of the great Indian film maestro and Oscar Awardee Satyajit Ray and were delighted with the offer made by the writer to share his film collection with them.
True to his words the Ambassador while in the meeting called up a promising young film director in India who was very interested in this project in Sudan and so in the near future it is very likely we will hear, “Lights, Camera, Action!” heralding a new phase of active India Sudanese cultural collaboration.