“Many a times, people wonder as to what is it that India wants from its engagement with the country of two Niles – our simple response is, to assist the people and the government of Sudan to achieve what they aspire for” said the Ambassador of India H.E. Sanjay Kumar Verma. The Ambassador addressed a distinguished gathering of 300 people on the lawns of his residence on the occasion of the 65th Republic day of India on 26th January’14. Present at the dinner were quite a few Sudanese ministers, politicians, senior officials from the Ministry of Foreign Affairs, Ambassadors of several nations, distinguished Sudanese people from every walk of life and a sizeable number of members of the Indian community in Sudan.

His Excellency Sanjay Kumar Verma further said “Capacity building is one of the main tools for conduct of India’s bilateral relationship with Sudan. Capacity building in human resource, in infrastructure and in industrial processes.  Objective is to assist the people and the government of the Republic of the Sudan to enter into the phase of a better socio-economic development with sustainable growth.  India too passed through similar phases and we are ready to share our experience, as done in the past, with our interlocutors in this country.  We open our educational institutions to our friends from Sudan – about 225 of them go to study in India annually on the Government of India scholarships, for both long and short terms, another 1500 or more go on self financing basis every year.  Though, it is difficult to put a number on the Sudanese nationals, who would have graduated from India, a number of over 30,000 have been estimated by many.  In order to leverage our friendship further, we are also engaged in creating institutions of human resource development in Sudan.  Two such ongoing projects include a center for English language training and another one for vocational training.  There are many other projects in the pipeline. Under our initiative to assist Sudan in capacity building for its infrastructure and industrial sectors, we are engaged in the construction of a 500 MW power plant in Kosti and a sugar mill at Mashkour.  There have been many such projects completed in the past as well.  Lines of Credit have been used as one of the tools to implement such projects, keeping their ownership with the people of this land. We are one of the significant trading partners to Sudan and have also taken up sincerely in setting up of industrial units here.  Currently, we are engaged in sectors such as agriculture, agro-processing, steel, pharmaceuticals, energy and mining.”

The Ambassador also added “The world would very soon, in a few months time, witness the largest democratic exercise on mother earth – about 800 million voters, about the same as the population of entire Europe, would be queuing up in India to cast their ballots, to have their say in who governs them and what should be the philosophy of the governance for the next five years.  Yes, India will have its general elections in next few months’ time from now.  An exercise, fully electronic and credible!  This is the largest event ever that the world would witness!  Of course, it will also be like a festival to celebrate the success of the Indian model of democracy”.

The Chief Guest and the official representative of the Government of the Republic of Sudan at the grand occasion was His Excellency Altayef Hassan Badawi, Minister of Culture. He conveyed felicitations and warm greetings from the President of Sudan to the Ambassador, Government and the people of India. Minister Badawi spoke of the historical ties between Sudan and India and referred to India as a symbol of rich cultural, historical and political civilization, as seen by the world. He was happy to announce that the relationship between Sudan and India is moving forward steadily in all sectors, politically, commercially and culturally despite international and regional changes taking place. It is important to point out the efforts taken by both the Governments at a top level meeting last November. As a result a meeting of senior ministers will take place soon. Another important meeting between the businessmen of the two countries will take place in the first quarter of the current New Year. He once again greeted the Ambassador of India and the people of India for their prosperity and development.

At the end all guests left with memories of a fine evening and delectable Indian cuisine. 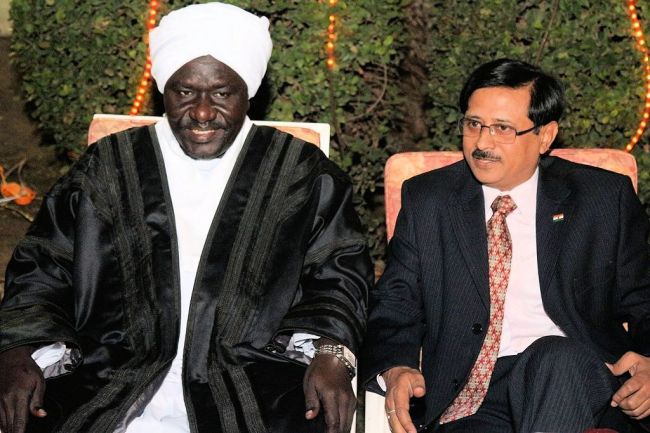 One thought on “India Sudan partners in collaboration and aspirations”