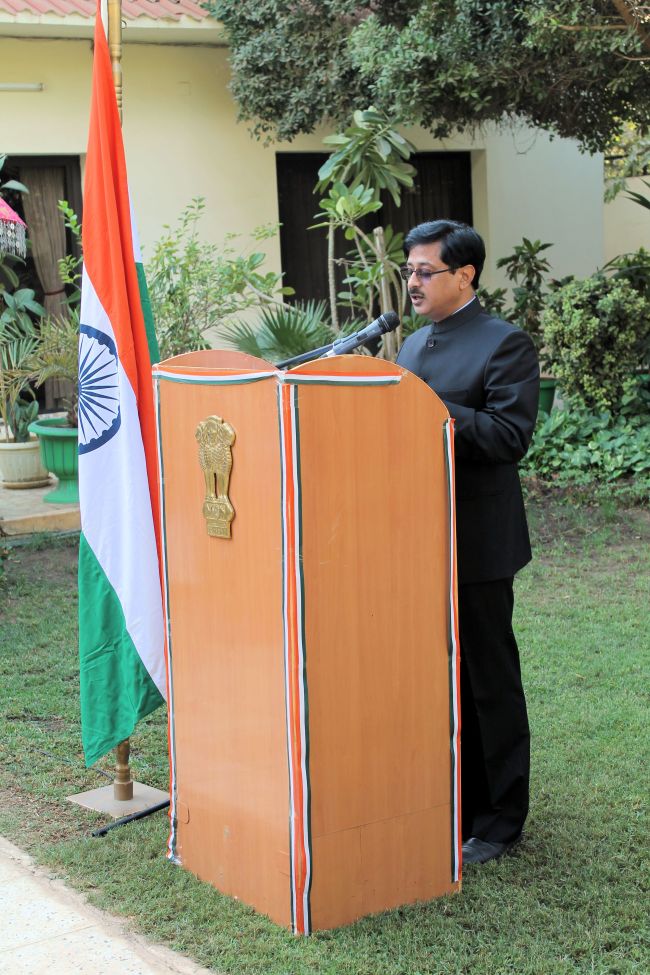 “2014 is a precipice moment in our history. We must re-discover that sense of national purpose and patriotism, which lifts the nation above and across the abyss; and back on to the road of prosperity. Give the young jobs and they will raise the villages and cities to 21st century standards. Give them a chance and you will marvel at the India they can create.” This is an abstract from the speech of the President of India on the eve of 65th Republic Day. The Ambassador of India in Sudan H.E. Sanjay Kumar Verma unfurled the national tricolor with the national anthem and read out the President’s speech to the Indian community gathered at India House, the residence of the Ambassador, at 9am on 26th January’14. He concluded the President’s speech with “India’s true strength lies in her Republic; in the courage of her Constitution, and the patriotism of her people.1950 saw the birth of our Republic. I am sure that 2014 will be the year of resurgence”. The day in Khartoum was celebrated with children dancing to patriotic songs and ladies singing for them. His Excellency Mr. Altayeb Hassan Badawi, Minister of Culture of the Republic of Sudan was the Chief Guest at the banquet in the evening. Several Ambassadors from various countries and other distinguished guests attended the function. The Ambassador of India H.E. Sanjay Kumar Verma addressed the august gathering by greeting them on the Republic Day and highlighting the significance of the Indian constitution and secularism in India. He also mentioned about the largest democratic exercise which the world will be witnessing with about 800 million voters, about the same as the population of entire Europe, during the forthcoming general elections. This will be fully electronic and credible . He then spoke about the historical and traditional friendship between India and Sudan.Capacity building is one of the main tools for conduct of India’s bilateral relationship with Sudan. Capacity building in human resource, in infrastructure and in industrial processes. Objective is to assist the people and the government of the Republic of the Sudan to enter into the phase of a better socio-economic development with sustainable growth. India is engaged in the construction of a 500 MW power plant in Kosti and a sugar mill at Mashkour. India is also engaged as trading partners in sectors such as agriculture, agro-processing, steel, pharmaceuticals, energy, mining etc. Mr.Badawi in turn conveyed the congratulatory message from the President of the Republic of Sudan and endorsed the Ambassador’s objectives of further strengthening and consolidating the bilateral relations between Sudan and India.