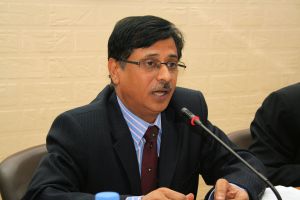 The Ambassador of India H.E. Mr. Sanjay Kumar Verma met the members of Sudanese Businessmen & Employees Federation in the latter’s office in Khartoum. Mr. Bakri Yousif Omer – Secretary General of the Federation introduced the Ambassador to his colleagues. Mr. Verma  candidly shared the opportunities for trade, commerce and capacity building between India and Sudan.

The largest commodity that India exported to Sudan in recent times is Sugar with a growth of 25%. Since the consumption of sugar in Sudan has gone up there is a potential of setting up new plants in Sudan and India could be a partner in these projects. There is no conflict of interest but  is of mutual benefit for capacity building in Sudan by Indian expertise. Next to sugar were items made of iron and zinc which also grew by 7-8%. Three wheelers were also in the increase and almost all were imported from India. Pharmaceuticals and particularly vaccines were imported from India which grew by 11%. COMESA was the single largest importer of vaccines and pharmaceuticals from India. The other sector which was imported by Sudan from India was Plastic/ PVC products. There is also a potential for capacity building for plastics in Sudan, rather than importing from elsewhere.

What has India been importing from Sudan?  80% of it was crude oil. Now this $300 million gap has to be filled by Sudan. The other commodity which was imported by India from Sudan was Rough Teak Wood which amounted to $13-14 million. This too was from South Sudan.  Scrap (mainly Iron, Aluminium and Copper) was also another import from Sudan worth $12-13 million. Gum Arabic was also imported which grew by 33%. India could partner Sudan for the Cotton industry. It can do much better than the $ 1.5 million.

The unique variety of Sesame of Sudan is another commodity Sudan can export to India. Sudan stands second after China from where India imports ‘Leather goods’. This can be more than $0.3 million. Even the import of Chickpeas can be achieved more than the actual $0.3 million. All above data are for the period April’12 to Dec’12 which has been extrapolated for the Indian financial year April’12 to Mar’13.

30% of India’s total imports are Crude Oil & LPG. Anything that can be pumped out from Sudan to India is welcome.  The total quantity of gold imported by India last year was 900 tons. India could partner Sudan by not only importing gold but also setting up a Gold refinery. India is the 11th largest importer of Copper ore and concentrates. Indian imports Sunflower oil and Sudan has excellent crop of Sunflower. Sudan can look at this segment including processing units. India imports Chickpeas and lentils. Sudan can boost the exports to India in these opportunity segments.

While answering the queries from members of Sudanese Businessmen & Employers Federation, Ambassador Verma explained that Reserve Bank of India has no directives to dishonor LCs from Sudan. The Government is looking into this issue to come out with a comprehensive solution. He however suggested that Indian Banks accept Middle East Currencies apart from US Dollars and Euro. The Ambassador also announced that Visa to India is actually issued in three working days.

Mr. Mamoun Gamal Managing Director of Citipharma acknowledged the points made by the Ambassador at the end of the meeting.

One thought on “Trade Opportunities between India and Sudan”